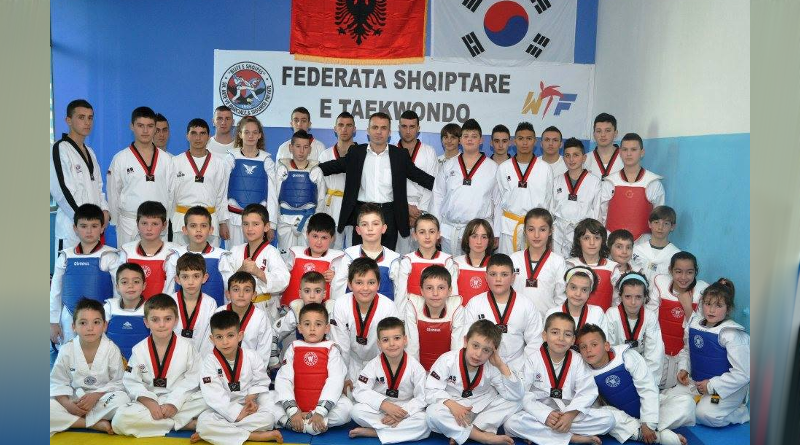 Fatmir’s passion for Martial arts began at the age of 10 and has hung on to the master ever since. Even so, he had a lot to struggle with, in terms of fleeing a communistic regime. In more than one attempt.

“I was born in a small village In Albania, My father was an Officer and my mother a teacher. Since I was 10 years old I have practiced MUNDIJE an Albanian-Pelasgian ancient Martial art system, part of the first Olympic games, held in Athen 776 BC. (Pancratio in the Greek language). In 1989, when I was 15, I decided to escape from the Communistic and dictatorial Regime in Albania to Europe. I took the Mountain road which was on the border to Kosova(Albanian State, at that time under ex-Yugoslavia juridical territory. I got caught by the Albanian border Military protection force and arrested. I was very lucky that I didn’t get killed because on that time everybody who tried to escape from our country got shot immediately.”

“In my younger years, I was inspired by watching the movies with Jean Claude Van Dame and started to train myself with a friend of mine in a hidden place, because at that time it was forbidden to train any kind of martial arts.”

Fatmir’s still had the thoughts of fleeing in his mind and risked his life once again. Both Karate and kickboxing was on trial, but Taekwondo was what really caught the young teenager interest.

“In 1991 I risked my life again and escaped illegally through the high mountains, alone 16 Years young to Greece. I saw a lot of martial arts schools there and I was very excited to start immediately. First, I tried Karate and kickboxing but none of them caught my interest, I stopped already after one month. Then I found a Taekwondo school. I was fascinated watching them from the window outside, especially how fast they kicked impressed me. Even though I was illegal there, I decided to register.”

Working in the construction business, hard work – paying just enough to pay for the Taekwondo lessons, and to get by. But Fatmir’s dedication and passion for Taekwondo grew, and new visions arrived.

“It was a very hard time. I didn’t have a family to take care of me, somebody to cook for me, somebody to support me financially. I had a job in construction, it was very hard work. I earned just enough money to pay the Taekwondo school. Because I came directly from the work to the school and I didn’t have a place to take shower, my clothes smelled of sweat and I felt the other students concern and aversion. I saw an opportunity, a dream and decided to make it come true. I decided to become a black belt and open the first school in my home country. I spoke with my teacher about that. But just before of the belt exam, I got caught by the police and was deported back to Albania. On the same night, I traveled back through the mountains once again, to attend the exam day. I especially remember the times in this period where I didn’t have money to buy food or pay the bus ticket, so I would walk two or three days along the Port to go to Crete where I studied Taekwondo.”

Fatmir’s dream about opening a Taekwondo school finally came true, in 1995 where he opened one of the first taekwondo schools of Albania. Everybody inside Taekwondo knows that attending tournaments leads to financial costs, but Fatmir even sold his car – so his students could attend.

“In 1995, I finally became a black belt and recognized from the World Taekwondo Federation. I returned to Albania and Opened my first school there. Some other people also opened some other schools that year. In 1997, I decided to take part in the first international tournament, Junior European Taekwondo Championship in Greece. Our school had about 30 students at that time. I chose 2 of them which were really talented and had a very strong character. I sold my car, the only propriety I had at that time, to cover the expenses, in efforts to make this dream come true. I was not prepared for such a professional event but wanted to represent my country and my flag in the best way. We didn’t have any kind of support from the state. So we went there with a friend in his car. The lot put us to fight against Russia and Belgium. I couldn’t imagine winning this fight.”

In a very short time period, Fatmir managed to get to of the most talented sparring athletes ready for their first tournament. A lot has happened since then, and many of his students have achieved some very impressive results.

“My one student with only one year training experience, (Yellow belt at that time, but I bought him a black belt to wear at the championship) one of the best of only 30 students, against the representative of the Russian Federation which should have had at that time about 500thousand taekwondo students, and this particular athlete with 10 years of experience, he was 2nd Dan black belt. But our student, Bledar Barmeta, won this fight with a big difference 12-4 as I remember. Next fight was against Belgium where he lost at the golden point. He didn’t lose because he got kicked, but he lost because of the minus points. The referee wanted to give the fight to the Belgium fighter, but he couldn’t get one point even though the fight got interrupted three times. At the final moment, the referee went between the two fighters with ” calio” and got kicked in the head – knocked out by my student with bandae dollyochagi (spinning wheel kick). Since that time we attended a lot of tournaments, more than hundreds of medals in international events. My students always fought with higher level opponents.”

“A little glimpse of the students I can recall, Amanta Kosova, Cadet who won the 3rd place in European Club championship, 1st place in Durres Open against the 2nd place in the world for juniors. Jonad Kosova Cadet won against Balkan Champion Junior and many other students…”

History sometimes repeats itself, for Fatmir it did, when he once again managed in a very short period of time – to train a talented champion. Before repeating history, he had a 10-year long stay in Germany, where he was trained by Grandmaster KO Eui Min 9th Dan.

“Later in 1997, I emigrated to Germany where I trained for about 10 years with the Head coach of the world, Grandmaster KO Eui Min 9th Dan. It was a great honor, having the chance to be trained by him. 2015 I emigrated to US and end of 2016 I opened in New York, Bronx my first school in the US called “The Professionals” Again the same story like in 1997 in the European championship. With only one year of training, my student Adrian Pergjegjaj competed against black belts, 3-4 Dan and won all his fights. He became Manhattan International open Champion 2017, New Jersey Open Champion, New York Open 2018 where he won against 4th Dan, 3 times US Open Champion. He was only blue Belt!”

Fatmir has in his Taekwondo life, had a lot of struggles and yet have managed to take his students and himself exactly where he dreamed of. But there are still things to do for Fatmir, perhaps something all of us who enjoy Taekwondo gets to see one day.

“Now I am part of the movie industry, making a carrier in New York. After playing in different serial shows, like Law&Order, Blue Bloods, Succession, Power, etc, my next plan is my own movie about my life in Taekwondo. In Taekwondo: We just came back from the US Open in Las Vegas. We had a very difficult category against all the best fighters in the world we met competitors like Steven Lopez US champion and Olympic champion, many representatives from the different countries at the last Olympic games like Spain, Senegal, China, Japan etc.
I was there with my student Adrian Pergjegjaj 17, now Blackbelt, competing in the senior Category for the first time and he experienced that there isn’t that big of a difference between his technical level and the other champions levels. Now our goal is to get into the American National Team and represent this country in the best way. First goal: US Champion!”

Fatmir’s way of training and taking talents far is something he would like other masters to adopt, he believes that things can be speeded up. If your focus is right, and the training is done correctly.

“All the trainers and masters which ask me: How do you make this possible, in a such a very short time, I say: is not only the longtime training that brings the students success, it is more the professional training. You don’t have to attend training 5 or 6 days a week to become a champion. You should train hard at least 3 days a week.
So here is my secret to building an athlete ready to compete, and I would like to suggest this to all masters. Beginners: train 3 times a week. One day training one day off so they have more time to relax and study. Start learning and practicing the kicks which you discover you are best at. Practice them every day. Try different schools and coaches, and choose the best, not the one who is near you. Look at their results, their student’s achievements, not their dan certificates hanging on the wall.” 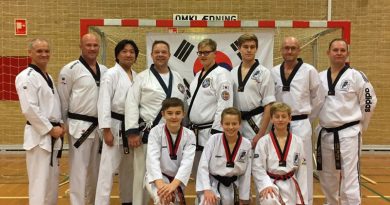 One thought on “Interview with Master Fatmir Bardhoci 5th Dan”