Like many other Taekwondo Athletes, Ida first started up in her local Taekwondo club, but fast discovered her talent, which speeded up things for the young athlete. Soon she would find herself as a member of the Finnish National Team of fighters.

“I was eight years old when my best friend’s father got his black belt and he started to teach taekwondo in our little village where I was living at the time. It was easy for me to learn Taekwondo and I was good in all areas of fighting, basic techniques, and poomsaes. I started competing in fighting and poomsaes when I was ten years old. First, my big brother went to competition and I only went cheering for him. I didn´t want to fight myself because I was too scared. The second time he went I went with him and fought myself. It makes me laugh now but when I went to competitions first few times I vomit before fighting because I was so nervous. From the beginning, I just loved fighting because it was so exciting and fun. I was also competing in poomsae but I didn´t have time to train both as much as I needed, so I chose to fight. In the year I became cadet I was chosen as a member of Finnish National Training Centre and I also moved to a different club in a bigger city. Same time as I started to train in National Training Centre, I started to compete abroad in A-Class competitions which are now G-competitions. “

One of the key elements of staying in any sports is to have the right motivation. In Ida’s case, it started with a lot of new things to learn, this combined with always having a goal keeps her going.

“In the beginning, I got my motivation from learning new things. I was very happy when I learned new techniques and poomsaes. When I didn´t do poomsaes physically I did them in my mind. Later I learned to do mental training also in other parts of taekwondo. In National Training Centre I started to train more, learn more and win more and this was a big motivator for me. I´m also ambitious in belt grades. I have always wanted to go to the next level and when I get there I think the next level. I need to have a goal and then I work hard to get it. “

We all have our favorite things in life, but also in Taekwondo, everyone will experience that some things will fall in favor.

“It´s easy to say what is my favorite part of taekwondo, it´s fighting and winning! Almost as good as it is to win myself it is to see my little brothers and sister to win. I´m always nervous when they fight and I cry many times when they win or lose because I’m so proud of them. If I don´t think of me or my sibling my favorite part of taekwondo is teaching it to children. I teach four times a week for children and I enjoy it a lot. I feel proud to see them learn and get new belt grades.” 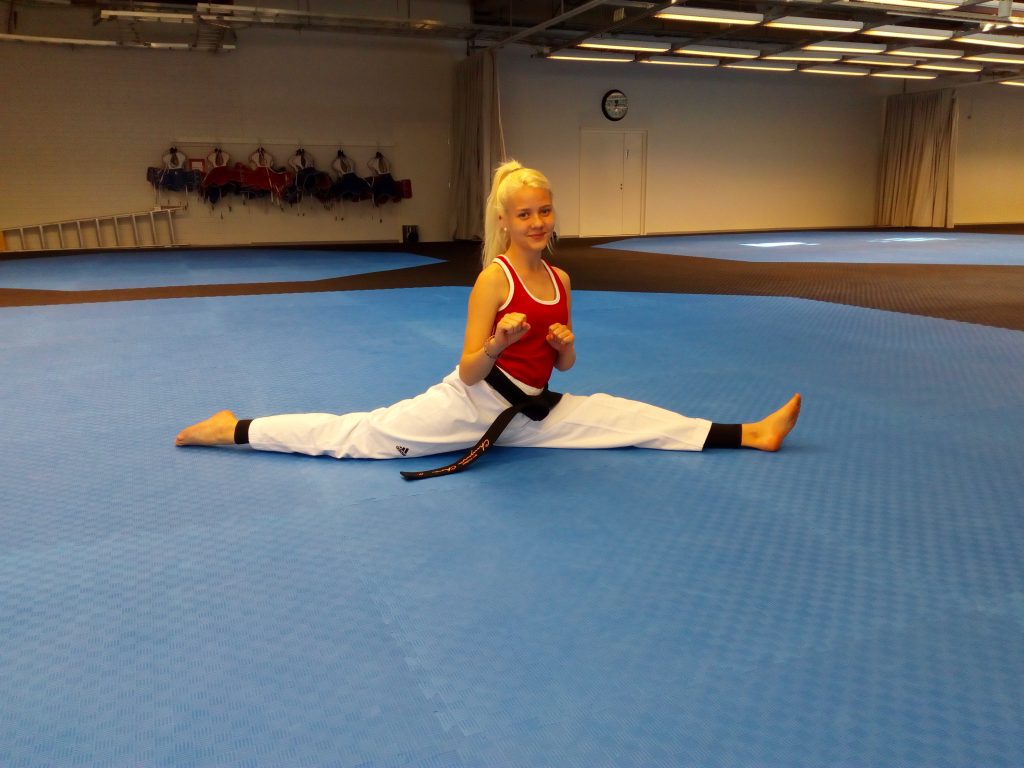 Achievements can be a lot of things, and in Ida’s taekwondo life there are a lot of achievements if you ask us. At a very young age she has managed to have several medals, and already at the age of 12, she graduated for 1. Poom.

Ida is living proof that the development never stops, and that Taekwondo is a lifelong journey, and the young athlete is no way near retirement. Many dreams and goals, are yet to be conquered.

“My next goal is to have good fights in World Junior Championships and Youth Olympic Game Qualifications in Tunisia in April 2018. Now I´m training hard so I can do my best there. My biggest goal is to fight in the Olympic games but there are many European and World Championships before that. Smaller goals are healing my legs from injury and win medals in G-competitions. “

Ida’s best advice if you are considering starting Taekwondo:

“My advice for somebody who wants to try taekwondo is to relax, have fun and enjoy. Taekwondo is for all, so you can do it just the way you want. And if you have big dreams just start working towards them and I believe you can have them all. “

Name: Ida Tammila
Age: 16 (2001)
Belt grade: 3rd Dan
Nationality: Finnish
Role: Finnish National Team Athlete
Family: parents, 4 brothers (one is in National Team) and 2 sisters (one is National Champion)
Taekwondo for me: Everything!! Taekwondo is my life and it´s everything to me.
Facebook: Ida Tammila – Taekwondo Girl